About my political inclination

I believe that painting always expresses more than the artist’s momentary convictions. Its political character lies rather in the fact that it is, inevitably, one of many possible extensions of reality, one of its impressions in time, an emergence to the center stage of some unsuspected, but existing, dimension of the world. And the world is made of particles in movement, creating organisms, in perpetual integration of elements. Politics, as part of general human action, is one of those “particles” of the world, which is integrated in life on earth.

My painting is always committed to the world, as it is impossible to be otherwise, even if not all of my creations are unilaterally provoked by a particular political event. On the other hand, particular political events (which may serve, and often did serve, as starting points and inspirations for certain pieces, which is the case of “Berserker”, “Painting for the empire”, “Homage to natural death”, etc.) ended up being reduced to pretexts for showing something bigger, something which surpasses them, whilst it gives evidence of their nature of tiny fractions in an omnipotent Cosmos.

So then, how to describe my position towards this necessity? For me painting is an end, but also means to achieve that same end. It is a process in time, whose ultimate consequences are always unpredictable, surprising. There is always an attempt to move away from the body of emotions tied to an event, and proceed to its integration in some sort of Wholeness, wherefrom is expected a final judgment, even if incomprehensible. I am motivated by a hope in a universal good, but I do not have any illusions about the desert of that good. The Being which sometimes appears in my imagination like an organism of gigantic proportions, and whose passing may implicate birth and death of entire galaxies, proves my disbelief in the rational foundation of that desert which would automatically put the human being on the top of the pyramid of life forms and in the centre of the universe. However, the return to the human present, apparently insignificant, is marked by shouts claiming justice and truth. And because this return is inevitable, there is always in my works an ethic and an intrinsic political print, both contextualized in the actual history.

The imaginary voyage to the limits of the universe, this surpassing of myself and my own biological and time/space boundaries and the subsequent return to the nature of the human, is the image that best expresses my painting adventure – the acknowledgment of the absence of a Being necessarily protective towards us, but rather indifferent to the human life, wherefrom we can find advantages for our species, and yet also destruction and death of humanity, the same acknowledgment being the grounds for the concern about making ourselves the caretakers of our destiny. 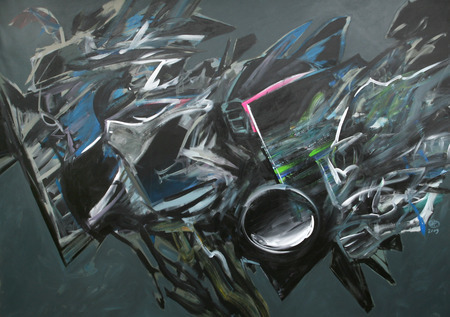